What a difference a good coach makes. At CrossFit Belmont Heights, our team is filled with some of the most knowledgeable and experienced professionals in the industry. You won’t find a more dedicated group of trainers who are genuinely invested in your goals. With our help, you’ll do more than succeed, you’ll excel! 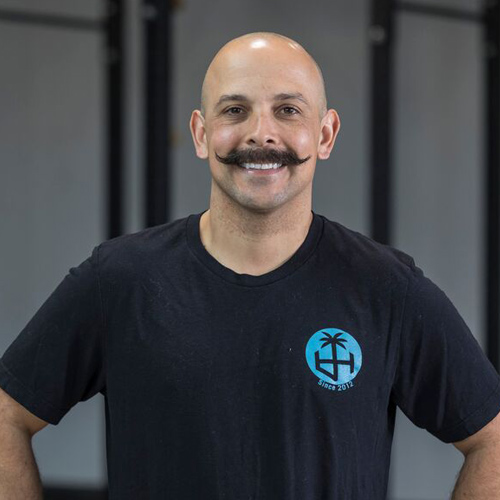 Nick grew up with an active lifestyle that started with a love of soccer. After graduating high school in 1996, he joined the United States Marine Corps and pursued his education at California State University, Long Beach. While there, he was the coxswain for the Varsity Beach Crew and competed on the men’s soccer team. After two years, he transferred to Santa Ana College and earned an A.S. in Fire Science with hopes of becoming a firefighter.

In 2003, Nick was sent to Iraq as part of Operation Iraqi Freedom. During his deployment, he conducted combat operations, which later earned him a Combat Action Ribbon. When Nick returned from his tour, he joined the City of Long Beach as a firefighter and paramedic. In 2010, he was introduced to CrossFit by one of his peers, and he’s been hooked ever since! 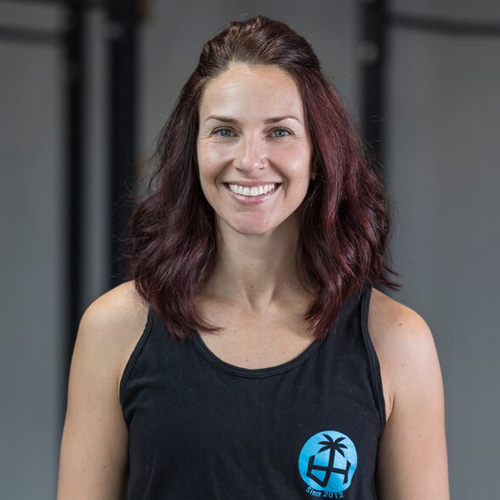 Jess is a longtime CrossFit and yoga enthusiast. In high school, her mom introduced her to fitness classes which sparked her love of physical activity. Later, she attended California State University, Fullerton where she obtained a B.S. in Kinesiology and embarked on a career in physical therapy. After four years in the industry, Jess needed a change of pace. She took a leap of faith and shifted her focus to yoga.

With just 6 months of practice under her belt, Jess knew yoga was her calling. Soon, she met with Nick and began CrossFit training in his garage. That same year, CrossFit Belmont Heights opened its doors and Jess found her happy place. She loves CrossFit, she loves yoga, and now she can have them both! 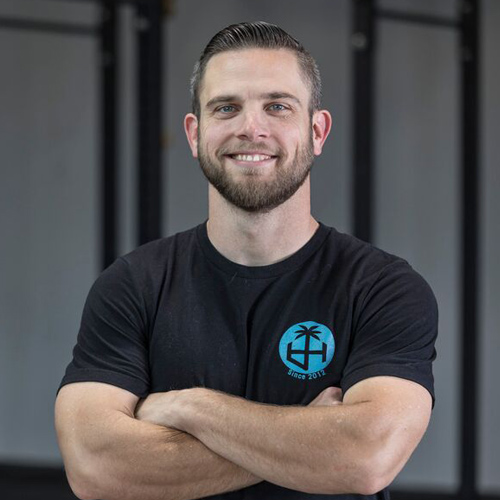 Jason is a former competitive gymnast and baseball player who discovered CrossFit in 2013. After just a few months of training, he knew he wanted to dedicate his life to health and fitness. Two years later, Jason joined CrossFit Belmont Heights and became a huge asset to the team. As a coach, he’s always looking for ways to increase movement, while decreasing pain. It’s one of the many reasons he’s opted to continue his education at California State University, Long Beach, where he’s working towards a Doctorate in Physical Therapy. His motto is: "When you learn more, you can do more." 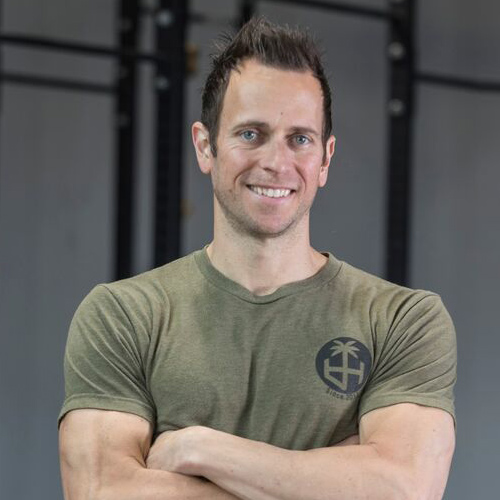 Born and raised just outside New Orleans, Louisiana, Fat Tony grew up passionate about riding BMX bikes, which he turned into a career as a photographer for a BMX magazine. In 2006 this career brought him to Southern California just after finishing his degree in Fine Arts from Louisiana State University in Baton Rouge.

One afternoon while riding BMX with his shirt off in the SoCal sun, a close friend made a comment to Fat that he was getting…fat! Was the old high school nickname coming true?! The next day Fat ran a mile for the first time in his life and became committed to getting and staying in shape.

It didn’t take long for the boredom of running to set in and in March of 2013 Fat stepped into CrossFit gym to try something new. He quickly fell in love with the community at the box and the progression of CrossFit that he related to learning new tricks on his bike. Fat’s lifelong passion for BMX was soon replaced by CrossFit. Even his career shifted from shooting photos of athletes at X Games to shooting athletes at the CrossFit Games.

After nearly five years of doing CrossFit Fat decided he wanted to help others improve their lives by sharing his passion with as many people as possible, so in early 2018 he earned his CrossFit Level 1 certification.

Fat believes in eating a whole-foods plant-based (vegan) diet and is on a never-ending quest to try new things as a way to keep fitness fun and exciting. Rock climbing, slack lining, ninja warrior training, surfing, mountain biking, and obstacle course racing are just a few of the ways Fat puts his fitness to the test on a regular basis.

*Note: Fat Tony is neither fat, nor Tony. His real name is Adam Taylor, but when he was 15 years old his friends thought this was a “dorky white kid” name and wanted to give him a “tough mafia name”. The name stuck, and now everyone just calls him Fat. 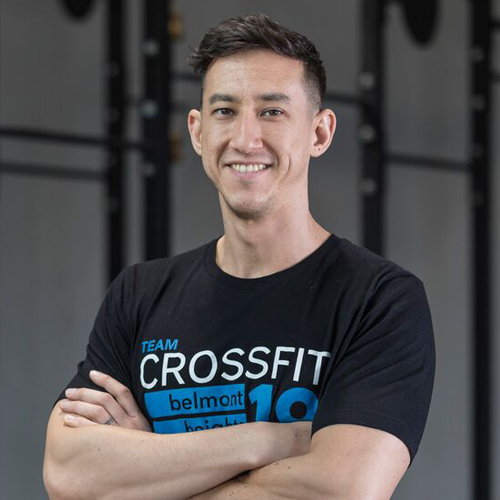 Originally from Orange County, CA, Edmond’s spent the last few years focusing on school and fitness. In 2013, after watching the CrossFit Games, he was inspired to join a local affiliate. After two years of training, he opted to take it to the next level and become an official coach. Edmond briefly worked at a box in New York City, before returning to California to coach full-time. When he’s not in the gym, he’s up to his eyeballs studying computer science.

Coach Amanda is best known as “AB" to the athletes at the CFBH.

A former collegiate athlete, who received her bachelor's degree from Whittier College in Kinesiology, always had a competitive drive and was getting bored with her recycled college workouts. She was looking to change up her workouts and her Coach mentioned CrossFit. Since she tried CrossFit out in 2014 she's been hooked. AB is competitive at everything...even board games.

AB says that CrossFit is just like her college sports days...a lot of fun with a great community that is always supporting you.

When she's not spending time at the gym (which is pretty much her second home) you can find her riding around Long Beach on her purple beach cruiser, hanging out with her dog Dotes, or watching the Dodgers or Packers games. 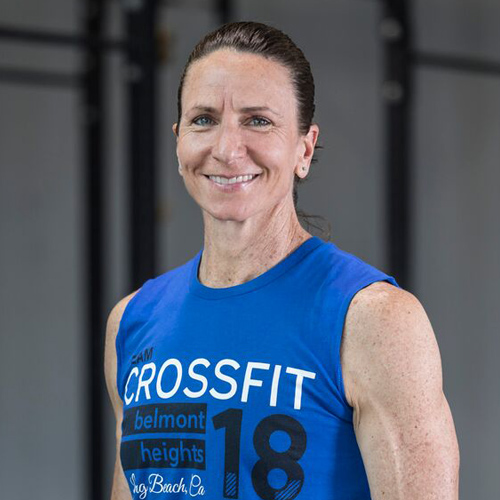 Coach Tami is a veteran CrossFit athlete with over a decade of experience. Her athletic career began at Cal Poly Pomona, where she competed in Division II basketball and volleyball. The latter of which earned her the distinction of All-American. She also studied Kinesiology where she earned a Bachelor’s Degree that would lay the foundation for her future endeavors.

To date, Tami is a 24-year veteran of the Los Angeles Fire Department and is ranked as a Captain II. She was also named 57th in the world at the 2016 Open, Masters (45-49 Division). When she’s not changing lives in the field, she’s doing it in the gym. Tami spends her free time taking classes, journaling her workouts, and helping athletes improve their technique. "Seeing them experience a personal victory is so meaningful to me. Getting to be an instrument in that is truly amazing." 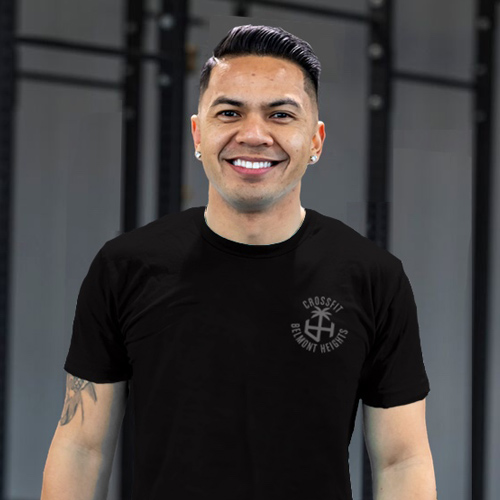 Ivan fell in love with Crossfit in 2012. Ever since then it’s been the Box all day. Going into his 4th year Coaching CrossFit, he specializes and enjoying Olympic lifting the most. As an Athlete, Ivan qualified for Rogue American Open for 2 consecutive years.

Ivan has holds an Associates degree in nursing from West Coast University.

Fun fact: Ivan had a personal transformation of 50lbs!

Our members’ success is our success. Here are some of the achievements we’ve celebrated with our awesome community here at Belmont Heights Crossfit. We love to see our members crush their goals! 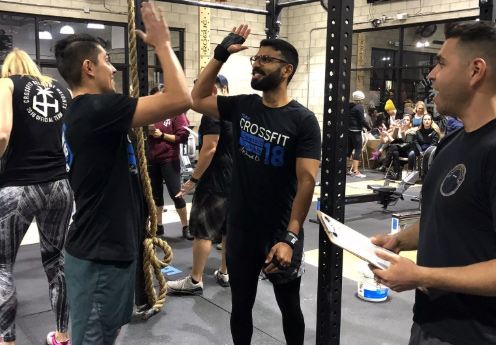 “CrossFit Belmont Heights is hands down the best in the area. Love everything about this box. Owners, Jess and Nick, coaches, Jared, Jason, Edmond and Sarah are very friendly, encouraging, knowledgeable and helpful. They offer variety of classes like WOD, Yoga, Kilo (Olympic Weightlifting) and Pulse (Non-barbell). I highly recommend CFBH to anyone thinking to tryout CrossFit for the first time or looking for a new box.” 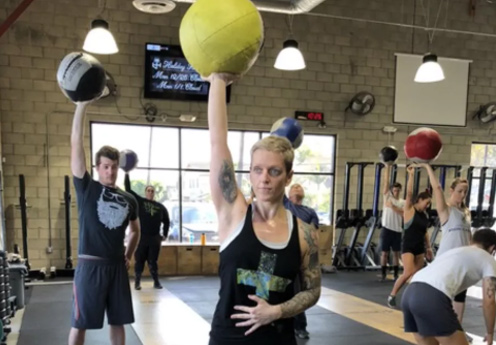 “Ya know how some places you look forward to a certain coaches classes? This place I look forward to them all. Every coach they have is so knowledgable, fun, and just plain nice ? The very first day I tried it out, one of the members said ‘welcome home!’ Haha and it really did feel like that. Jess and Nick have created this amazing place to work your ass off but also enjoy doing it..well, at least before and after the wod is over ? They’re big on form which is sooo nice, no matter how long it takes. I would always be tweaking something at my last spot, but not here. Definitely give em a go, you won’t be disappointed!” 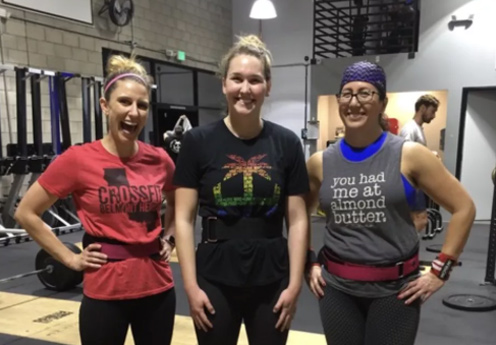 “I absolutely love this box. The owners Jess and Nick are awesome and the trainers are so helpful and amazing. I am very new to CF and when I was looking to switch over from boot camp, I had tested out four different boxes in the LB area and none of them came close to CrossFit Belmont Heights. From the first class, I felt like I had a sense of what I was doing. The trainers are very good at making you feel comfortable and instructing you on how to do lifts the proper way to ensure you don’t hurt yourself. I can’t imagine finding another CF gym like this one!”

Try an intro session for free!

Whether you’re new to Crossfit or a Seasoned Pro, come and try us out for free…

Try an intro session for free!

Whether you’re new to Crossfit or a Seasoned Pro, come and try us out for free…

Simply select a service you’re interested in and Jess will get back to you with the next steps.

all the latest news at CF Belmont Heights